While researching the use of vraic in the Island at the archive centre in St Helier, recently I came across a very interesting story regarding vraic buns. I was intrigued to learn more and hopefully find a recipe for these nourishing buns.

As it transpired and with further enquiries I discovered a story that must be shared.

The Donkey and the Vraic buns by Martin Little

Back in April 1933 a young lady by the name Celeste Le Brun was entrusted with the job of baking vraic buns for the vraiccers at La Pulente. Over the years her family gained a favourable reputation for making the best vraic buns and also the best cider from the family orchard in Trinity.

That spring her cousin Elise from Quimper came to stay with the family and the two young girls became best of friends working together on the farm and in the bakery.

Elise brought with her various recipes from Brittany including the merveilles a type of doughnut a bit like a Jersey wonder, maybe that is where the idea for the wonder originated. She also had a recipe for a type of rock cake or bun that she understood was a type of elixir d'amour because of the ingredient of a special seaweed added to the mix.

The two girls concocted a plan to use this new recipe for the Easter vraic buns which they were entrusted to bake. Both girls had taken a fancy to the two Le Marquand brothers of St Peter. They were fine strong fishermen from the parish and were called upon to help with the vraicing. They were named Jean Claude and his slightly older brother Phillipe.

The brothers were hard working at loading the vraic at La Pulente during the spring tide and as a cart load would be going to the Le Brun's at Trinity the refreshments and vraic buns would be provided and served to the vraicers by the girls. They rested the baskets full of the tasty buns and jugs of home-made cider just next to the donkey cart and called to the vraicers to down tools and enjoy a rest and some refreshments.

The girls shyly tried to make some conversation with the brothers and just as they did someone shouted out "The ass has got the basket and the jugs of cider have tumbled all over the buns and he's devouring the lot".

By the time they got to the donkey there was only a few soggy buns left and Phillipe let the donkey finish them off not knowing the consequences.

With the tide starting to turn the brothers had to get back to there work and Celeste and Elise headed back to the slipway embarrassed at what had happened and none the wiser at what was about to happen.

From the slipway they watched as the vraicers tried to load the donkey cart but the donkey kept making strange advances and braying like a demented foghorn toward a large mare shire horse owned by the Constable of St Brelade, Gilles De Gruchy. The donkey kept biting and pulling the feather hairs of the regal workhorse.

The donkey was out of control with the Constable shouting obscenities at the Le Marquand brothers and ordering them to take control of the over excited donkey. This caused a ruckus on the beach the likes that no one had seen before. Celeste and Elise soon stopped the laughter after seeing the mare give a double wallop of a kick that knocked out cold the poor donkey.

By this time onlookers and young ones on the shore were gathering in masses to witness the events unfolding before them. Now with the tide turning and the donkey laid out flat the vraicers had to cast off the vraic from their carts and with the help of onlookers including the Le Brun girls help to load the poor donkey on to the cart.

It took over a dozen onlookers and vraicers to then pull the cart up the slipway with the drooling and slobbering donkey on board and safely above the high-tide mark.

Constable De Grouchy was waiting and was not amused as he had lost most of his cart load of vraic when his mare bolted up the slipway to escape the randy donkey.

The States Vet had to be called to tend to the Le Marquand's donkey and was of the opinion that the poor creature was concussed but would recover in time. He did however make note of the smell of cider coming from the donkey's breath.

The Constable then ordered the brothers to appear at the parish hall the next morning.

Celeste and Elise quickly biked home to Trinity never mentioning a thing about what had happened until a week later when Mr Le Brun, Celeste's father, realised that his cart of St Ouen's vraic had not arrived.

They told him it was the fault of the constable of St Brelade and his beautiful shire mare. The recipe for vraic buns was kept secret until now and combined with Jersey's finest cider marks the start of the joys of Spring. 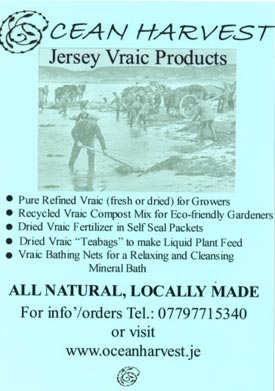